Sanford/Springvale
In 1661 a lumberman named William Phillips, who owned several mills along the Saco River, purchased a large tract of land from the Indian Chief Fluellin plus another from Chief John Rogomock. That purchase encompassed what is now the town of Sanford plus some area from its surrounding towns. The parcel was called "Phillipstown" and remained uninhabited until 1739.
Once settlement began, the town grew rapidly. An unofficial census in 1752 listed 100 residents, while the first official census taken in 1790 listed 1,799. Residents petitioning for town status finally succeeded in 1768. Maine was then a province of Massachusetts, so the Governor of Massachusetts was responsible for signing the incorporation papers. He exercised his right to choose a name for the town, and selected "Sanford" in honor of Peleg Sanford, stepson of William Phillips and former four-term Governor for the State of Rhode Island.
Although there was some activity with production at twelve sawmills, growth in the early 19th century was slow, as farmers and woodsmen moved in from nearby Maine towns and from Massachusetts. Agriculture predominated until the late 1860's when Thomas Goodall established Goodall Mills. At first the plant made only carriage robes and blankets but later expanded to produce railroad car upholstery, carpets, draperies, auto fabrics, armed service uniforms, and material for men and women's clothing under the "Palm Beach" label. Skilled textile workers were attracted to Sanford from the woolen centers of England, the French-speaking provinces of Canada, and from other foreign countries.
Springvale got its name sometime in the late 1820's when that part of town became the site of a large calico cloth printing plant. The plant was situated on the west bank of the Mousam River near a natural spring which still flows there. In a ceremony to formally launch the new enterprise, Elder Thomas Greenhalgh, one of the new firm's owners, mounted a box and offered a prayer. Someone in the crowd asked what the place should be called. Greenhalgh said "spring ... vale," motioning toward the flowing spring and river valley. The firm was subsequently named Springvale Print Works. It continued in operation until 1853 when the plant and most of its adjacent buildings were destroyed by fire.
In 1954 when the Goodall Mills closed, the Sanford•Springvale Chamber of Commerce was formed to both sustain and expand the community's economy. Today the industrial base in the Town is diversified with forty plus firms producing a vast array of items from woolens to aircraft and their components. 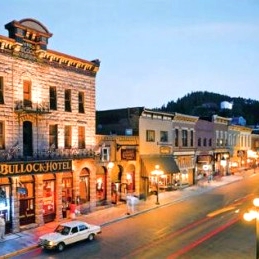